Named after the famous scientist and native of Pisa, Galileo Galilei Airport (PSA) is one of the two main airports in Tuscany, along with Peretola Airport in Florence.

The airport shopping area, La Corte, has over 20 shops, and two restaurants.  However, at only 1.5 km from the city you could probably wait for the 10 minute drive by car hire Pisa Galileo Galilei Airport to see what is available in town.

Located on the right bank of the mouth of the River Arno, Pisa is known world wide for its Leaning Tower.  More than 20 other historic churches, several palaces, and various bridges accompany the famous bell tower, all of which are worth seeing although they stand straight.  Plan ahead for all the sightseeing with Pisa airport car hire for convenient transportation.

Booking your car hire vehicle for Pisa Galileo Galilei Airport in advance is the best way of getting the best deals and cheap car rental offers in 7 seater, 9 seater or any type of car hire vehicle you need for your stay in Pisa, Italy.

Home to one of the most influential families in art history, Medici Palace is the place to see how the aristocracy of Italy lived.  Once a possession of the Appiano family, who ruled in Pisa from 1392-1398, it was acquired by the Medici in 1400 and became home for Lorenzo de' Medici. 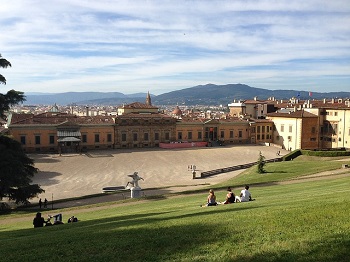 The Church of San Nicola

Home of such famous works as the Madonna with Child by Francesco Traini (14th century) and St. Nicholas Saving Pisa from the Plague (15th century), the Church of San Nicola is a true Pisa treasure.  Dating back to 1097 this monument is rich in centuries of art and religious history.  Other works include the wood sculptures by Giovanni and Nino Pisano, and the Annunciation by Francesco di Valdambrino.

There are many more noteworthy churches in the area, easily accessible by Pisa, Italy car hire.

The "Royal Palace" is a significant spot in history for all star gazers as the place where Galileo Galilei showed the Grand Duke of Tuscany the planets he had discovered with his telescope.  Originally built in 1559 by Baccio Bandinelli for Cosimo I de Medici.

Where the impressive Palazzo della Carovana and the church of Santo Stefano dei Cavalieri, both designed by Giorgio Vasari, may be found.  It houses a bust by Donatello, and paintings by Vasari, Jacopo Ligozzi, Alessandro Fei, and Jacopo Chimenti da Empoli.  Knights' Square is also the place to find the spoils from the many naval battles between the Cavalieri (Knights of St. Stephan) and the Turks from the 16th century.

Not likely to make a short visit, plan to leave Knights' Square at your leisure by car hire Pisa, Italy.

Also known as Piazza dei Miracoli (Square of Miracles) lies to the north of the old town center.  Home of (yes) the Leaning Tower, it also features the Duomo (the Cathedral), the Baptistry, and the Camposanto Monumentale (the monumental cemetery).  So go ahead and get that prize shot in front of the tower to take home to your friends, but make sure you tell them how much more there was to do and see!

Perhaps a name like that needs no explanation, but this ancient port town has some ancient stories to tell.  This impressive museum houses the largest cetacean skeletons collection in Europe!  If you thought you were taking in the past with 11th century buildings stop in for a gander at these fossils.  Located outside the city in Certosa di Calci, you can save on the scenic route by cheap car rental