The Barcelona Airport,also known as the El Prat airport, airport code BCN, is the second largest in Spain. It is equipped with 256 flight information screens and 14 passenger information points. The airport also has six VIP lounges, a business centre, hair salon and spa, Wi-Fi zone, 81 shops and restaurants, to guarantee a pleasurable pass-through experience for travellers. Additionally the infrastructure is accessible for people with limited mobility.

Servicing mainly domestic, European and North African destinations it also has minor flights to Southeast Asia, Latin America and North America. It is a hub for Vueling Airlines plus it is a focus city for Air Europa and Iberia Airlines.

Tour around in the rental vehicle of your chosen size, be it a 7 seater, 9 seater, minibus or minivan, to accommodate your needs and those of the people travelling with you from Barcelona Airport, Spain.

Car rental counters at Barcelona Airport are conveniently located in both Terminals 1 and 2. To find the car hire company in Terminal 2 go to building T2B.

You'll get amazing discounts and car rental deals for 7 seater, 9 seater, luxury cars or any other type of vehicle for your car rental needs in Barcelona Airport.

For further information on booking your rental car, visit our section How to book a rental car in Barcelona.

Antonio Gaudi´s church has been under construction since 1882 and is still not finished. This giant Roman Catholic church has been a top tourist sight to see due to its idiosyncratic design and huge scale. A portion of its interior was opened to the public in November 2010. Opened from 9am to 6pm (Nov – Feb), 9am to 7pm (March and October) and from 9am to 8 pm (April – Sept.) admission is 15 Euros. 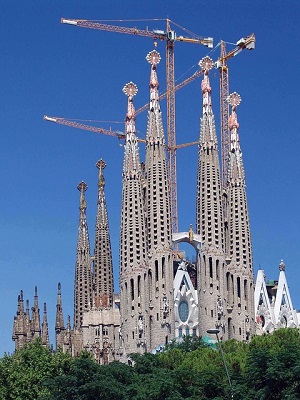 Drive to Sagrada Familia and tour the surroundings as well in a car hire vehicle in Barcelona, Spain.

A replica of a quaint Spanish village mirroring architecture from different parts of Spain, is home to a number of speciality craft shops. Opened Monday from 9 am to 8 pm, Friday 9am to 3pm, Saturday from 9am to 4pm and Tuesdays, Wednesdays, Thursdays and Sundays from 9am to midnight, a day ticket will cost you around 13 euros for adults.

Visit Poble Espanyol in a hire car from Barcelona, park your rental car and walk around the streets to get a closer look to the quaint atmosphere in this beautiful quarter in Barcelona, Spain

Featuring a chronological display of Picasso´s paintings depicting the artists development over time. Opened Tuesdays to Sundays from 9am to 7pm (Thursday until 9.30pm), admission is11 euros for main exhibition; extra during special events.

The most wacky and striking natural landmark on the road from Barcelona, these naturally formed rock pillars, standing 4,000 feet high, are home to the monastery which houses a statue of the virgin of Montserrat, known as “La Morena” or Black Madonna.

How to get there in a rental car from Barcelona:

The drive takes about 90 minutes in a hire car from Barcelona.

Head out of Barcelona on the Avinguda Diagonal and take the B-23 motorway. Then take the A2 motorway and exit at Manresa where you should take the C-55 to Monistol de Montserrat. From here you can take a cable car to the sanctuary as parking is limited.

A medieval city featuring sights such as the Cinema Museum, the Jewish quarter and Roman baths. An ideal place to wander around and admire the hillside landscape.

How to Get There in a hire car from Barcelona:

Located about an hour and 20 minutes rental car drive from Barcelona on the A7 motorway. From Barcelona head north in the comfort of your hire car and follow the motorway signs which show you the the way.

Dali´s home town and location of his museum, which houses one of the largest collections of his work. The building itself is an eccentric marvel not to be missed. Entrance price to the museum is 14 euros.

How to Get There in a hire car from Barcelona:

Located 139 km from Barcelona, an hour and 30 minute car hire drive on the A-7 motorway north of Barcelona.