The Beijing Capital International Airport is very large but well organized. It has three terminals, one of which is larger than all five of London Heathrow's terminals put together. It was expanded for the 2008 Olympics, and now its three terminals are accommodating and efficient.

The airport is just 26 km from the city centre, to the northeast of the central districts. It is advisable to arrange for a car hire at Beijing Airport as opposed to a taxi, as there are reports of various common taxi scams for travellers.

During your stay in the capital of the most populous country in the world (the People's Republic of China), you can choose from a variety of activities and sights. Beijing is the political, educational and cultural centre of the country and is home to many of its most treasured historical sites and cultural institutions.

A well designed city for visitors to navigate, Beijing has concentric "ring roads" that go around the metropolis. Enjoy your time exploring Beijing with car hire from Beijing Airport.

Find the cheapest car rental deals in Beijing Airport by booking in advance with us today. Our search engine will find you the best offers on car rental discounts on 7 seater, 9 seater, luxury car or any other type of car at Beijing Airport.

Cycling Through the City

Although China is no longer a nation of bicycles with more and more private car owners every day, Beijing is still the perfect city to tour around by bicycle. The city is almost totally flat and travel by bicycle is often faster and more efficient than by car, taxi, or bus in the congested downtown area. You can rent a bike from many major hotels.

The most prominent and popular tourist attraction in Beijing, don't miss the world's largest public square during your stay. The square is adorned by grand buildings, including the Great Hall of the People, the Museum of Chinese History, the Museum of the Chinese Revolution, and a few more. Get to the square from your hotel destination by Beijing rental car. 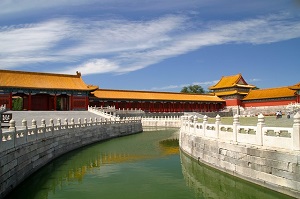 Visit the Dongcheng District to see the most important palace in Beijing. The Forbidden City was home to the Imperial Court of China during the Ming and Qing Dynasties. This is one of the only sights of its kind which was left untouched during the Cultural Revolution thanks to the timely intervention and protection of Zhou Enlai's troops who guarded the palace from the Red Guards.

The Great Wall of China

Only about an hour's drive away, the Great Wall of China makes for a fantastic and memorable daytrip from Beijing. Choose the Mutianyu section over the Badaling section as it has been restored and is far less crowded.

About three hours away from Beijing by cheap rental car, Shijiazhuang is a young city featuring the Hebei Provencal Museum, Pilu Monastery, and the Martyrs Memorial. The Heibei Provencal Museum houses the tomb of King of Zhongshan from the 4th century BCE.

Conveniently located in the centre of the country, Zhengzhou is a major transportation hub and a great place to start your journey exploring Chinese cultural sites, such as Kaifeng, Louyang, and Shaolin Temple.