The Aberdeen Airport is located just 6 miles northwest of Aberdeen city centre in Dyce.  It was the second busiest airport in Scotland in 2010, and it offers a wide range of domestic as well as European international flights.  Aberdeen Airport operates several flights daily to the major domestic hubs, such as London Heathrow Airport, London Gatwick Airport, and London Luton Airport, frequently to major European hubs, and offers longer distance holiday flights on a seasonal basis.  Reserve a car hire from Aberdeen Airport for your stay in Scotland.

Aberdeen is the third largest city in Scotland, and while it may be overshadowed  by its two bigger sister cities, Glasgow and Edinburgh, it's managed to collect more affectionate nicknames.  Known as the "Silver City," "Rainbow City," or the "Granite City" due to the sparkle of a particular stone which was used for centuries on buildings across the city, Aberdeen today is most accurately the "Flower of Scotland" for the many beautiful parks, gardens and flower displays you can enjoy on a visit there.  Take an Aberdeen Airport car rental around to enjoy the city's green spaces.

Aberdeen Airport has an area next to the main entrance of the terminal where major car rental company desks can be found.  The car rental pick up is at Broomfield Road.

The following companies can be found inside Aberdeen Airport: 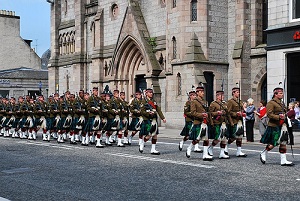 Visit this one-of-a-kind art gallery inside an old Victorian building featuring a breathtaking marble and granite hall.  The Aberdeen Art Gallery includes paintings, sculptures and pieces by the Scottish Colourists as well as silverware and decorative pieces.  Admission to the gallery is free, so it is the perfect stop on your tour of Aberdeen by car hire.

Families in Aberdeen can visit Scotland's first science and discovery centre.  Expand your mind and entertain the family with over 50 hands-on interactive exhibits as well as live science shows.

Spend an afternoon shopping at local high street shops and boutiques in Aberdeen at the Trinity Centre, and then grab lunch at one of the nice cafes there.  There are several streets lined with stores in Aberdeen which can be reached with your car rental, but you can find the best variety in one location at the Trinity Centre.  Check out Debenhams department store or find some of your favourite music at HMV.

Aberdeen is a great base to explore the beautiful Scottish castles of the surrounding area.  Less than a thirty minute drive in your Aberdeen car hire are all the castles of Crathes, Drum, and Donottar.

Plan a self-guided tour of Scotland's favourite spirit during your stay in Aberdeen.  The Malt Whisky Trail is a route that begins roughly 30 miles north of Aberdeen and takes you past a string of distilleries.  Stop and take the tours at the Distilleries of Glenfiddich and Glen Grant.