As an international Airport, Fort Lauderdale is a major gateway for travelers from Central and South America, and the largest base for the popular low cost Spirit Airlines, which operate a number of services to Central American cities such as San Jose, Costa Rica.  It is a focus city for Allegiant Air, JetBlue Airways, and Caribbean Airlines.  Fort Lauderdale also serves as a gateway for cruise line passengers due to its close proximity to Port Everglades.  Unlike Miami International Airport, Fort Lauderdale offers free Wi-Fi internet access in all of its terminals.  Begin your journey in the United States with a cheap car rental from Fort Lauderdale Airport, Florida. 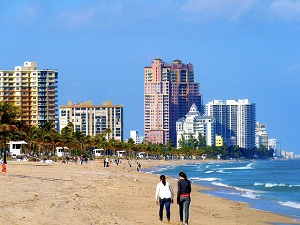 Known affectionately as "The Strip," Fort Lauderdale Beach is perhaps a bit more upscale that it's reputation.  Still thought of by many as a spring break hot spot, the once crowded hotel resorts have been replaced by fancy European restaurants and luxury condos.  Still a laid back atmosphere the beach is beautiful and full of fun in the sun for families, couples, and individuals alike.

Boutique shopping, upscale restaurants, hot nightclubs, and other entertainment can all be found in Fort Lauderdale's downtown area on Las Olas.  Head out to enjoy the evening air by car rental or park and walk to some of the businesses along the RiverWalk.  Other great places to spend your money in Ft Lauderdale include Sawgrass Mills on Sunrise Blvd, Festival Flea Market in Pompano Beach, or the Swap Shop which has fruits, vegetables, and even a drive-in movie theater!  The perfect way to spend a day if you happened to rent a convertible car rental in Florida.

Fort Lauderdale is the perfect trip by car rental to get out and get active.  Since it is one of the few places in the United States with year round sunny weather people come from all over to take part in fun physical activities such as golfing, snorkeling, scuba diving, deep sea fishing, running, swimming, triathlons, and more!

This UNESCO World Heritage Site protects more than 1.5 million acres of unique habitat including pine forest, swampland and mangroves.  Home to a variety of rare and endangered species, the Everglades National Park is the place to go by car rental to see real life American crocodiles, West Indian Manatees, and possibly even the Florida Panther.

Park your car hire at Port Everglades and take a short cruise of the Caribbean from Ft Lauderdale.  The nation's second busiest cruise ship port after the port of Miami, Port Everglades features a variety of ships headed out for anywhere from one day to several weeks.

Miami is a huge metropolis with excellent party beaches, topless sunbathing, excellent clubs, and much more.  Spanish-speakers will feel quite at home here, up to 65% of Miami's population is from Latin America or of Latin American decent.  Foodies will have a great time in Miami as well as it is heralded for its unique New World Cuisine.