A great start to an affordable tour of England by cheap car hire, the East Midlands Airport is a hub for low fare airlines.  The popular low cost carriers Bmibaby and Ryanair offer a range short haul destinations, and First Choice Airways offers holiday flights to the Dominican Republic, Orlando, and Cancún.

East Midlands tends to be a bit drier than other parts of England and there are plenty of places there to get out and enjoy nature.  It is the home of the Trent River, the third largest river in England, and is the southern end of the Bennine range of hills. 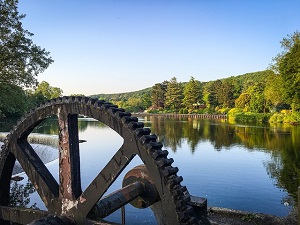 One might think, after having a good look around at all the rounded hills of this park, that its name was an ironic joke but Peak District is actually named for a local tribe from the area. This is a lovely area for walking. The park has many natural features such as the caves of limestone at Castleton.

Head over to Donna Nook on the East coast in your East Midlands car rental to enjoy this protected natural area and view some animals.  If you're visiting in the right time of year you can see seals who visit Donna Nook seasonally.  There are also beaches here, and though they make for some great scenery they are a bit too cool for swimming.

Located just west of the East Midlands, Lichfield in the West Midlands and offers several nice attractions to visit on a day trip by East Midlands car rental.  Check out the only Medieval Cathedral with three spikes, the Darwin House, and the Dr. Johnson Birthplace Museum; the single most quoted English writer after Shakespeare.

If you would like to visit a big city during your stay without going into London Birmingham is located just 16 miles south of Lichfield and doable as a day trip from East Midlands.

Birmingham offers travellers a plethora of museums, parks, historic and religious buildings, as well as a lively nightlife and club scene. Go out for drinks and some live music in Birmingham during your visit to East Midlands by car hire.

Also located in the West Midlands, the town of Warwick sits on the River Avon and offers day trippers lovely scenery.

Warwick Castle is one of the top tourist attractions in England and offers a rather accurate look at what life was like in the castle through the centuries.

Warwick Castle's haunted tower and dungeon are also open to the public.