Plan a trip to Jordan with a cheap car rental from CarHireX.com.  One of the most modern and liberal nations in the Middle East, Jordan is bordered by Israel and the West Bank, Syria, Iraq, and Saudi Arabia.  Nearly landlocked by its neighbors, the small country of Jordan has only a small 28 kilometer coast on the Red Sea and a frontage on the Dead Sea. 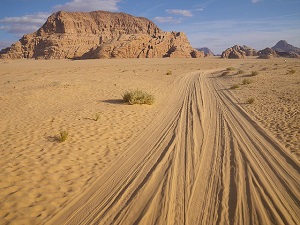 Driving a car rental is an enjoyable way to tour Jordan.  The country's roadways are generally in good condition, fuel prices are fixed, and traffic laws such as speed limits are well enforced.  As you are driving around Jordan make sure you can fully enjoy the dramatic scenery of this mountainous country with a 4x4 car rental.  Sites every traveler by car hire in Jordan should see include the Archaeological Ruins at Petra, the castles of the Eastern desert, and the Dana Nature Reserve.

Secure the cheapest rates on your Jordan car rental by booking online today through CarHireX.com.