Fly into the Italian island of Sicily through Catania-Vincenzo Bellini (Catania-Fontanarossa) Airport. Located 4.3 km south of Catania, the second largest city on the island, the airport is named after the great opera composer Vincenzo Bellini who was born in Catania. Arrange for a car hire Catania Airport to await your arrival and enjoy the convenience of private transportation straight from the airport.

Conveniently located close to the A19 motorway, linking Catania with Palermo and central Sicily, and the E45 European route which runs to Syracuse in the south. It is easy to get around to the city from Catania Airport, as well as convenient to begin your tour by Catania Airport car hire around the island.

Booking your car hire vehicle for Sicily Catania Airport in advance is the best way of getting the best deals and cheap car rental offers in 7 seater, 9 seater or any type of car hire vehicle you need for your stay in Sicily, Italy.

U Liotru, or the Fontana dell'Elefante is known as the symbol of Catania. Created in 1736 by Giovanni Battista Vaccarini, it portrays an ancient lava stone elephant topped by an Egyptian obelisk from Syene.

The Catanian Museum of Mineralogy, Paleontology, and Vulcanology

The presence of an elephant in the millenary history of Catania is connected both to zooarcheology and popular creeds. Visit the Paleontology section of the museum, where you can learn how the prehistoric fauna of Sicily from the Upper Paleolithic included dwarf elephants.

The museum also holds the integral unburied skeleton of an Elephas falconeri in excellent state of conservation. Perhaps this history has a lot to do with the choice of the city's symbolic u Liotru.

Sanctuary of Our Lady of Ognina

Dating back to 1308, take your Catania, Italy car hire over to the maritime quarter and main fishing pole of Catania to visit this richly historic monument. The church is a result of the gradual modification of the Greek Temple Athena Longatis or Parthenos Longatis that existed on the steep reef.

The city has been buried by lava a total of seven times in recorded history. Under present day Catania lie the Roman city that preceded it, and the Greek city before that. 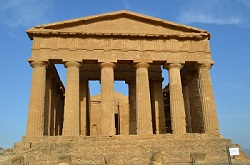 Reserve a car hire Catania, Italy for a day spent touring the many ancient monuments of the city-centre. Ancient edifices include the Greek-Roman Theater of Catania, Odeon, the Greek Acropolis of Montevergine, and other Roman city features.

Take a trip outside the city centre to experience Catania Cuisine in a relaxed town atmosphere. Try Pasta alla Norma, a pasta dish made out of macaroni-like penne, tomato sauce, largely sliced aubergines, and often topped with salty ricotta. For dessert try the Garanita, a popular flavoured-sherbert.

Spend the day at the opera. The famous composer Vincenzo Bellini was born in Catania, and this opera house named after him presents a variety of operas, many of which are the work of Bellini. The opera season runs from December to May.

Save on your day at the opera with a cheap car rental Catania, Italy online.