Nicknamed "Sea-Tac", the Seattle-Tacoma International Airport is a major hub for Northwest and West Coast destinations.  Internationally it handles several frequent trans-Pacific routes as well as direct flights to the major European Airports.  Located just 25 minutes from downtown Seattle in a low traffic suburb it is a convenient drive to the city by Seattle Airport car hire.

Seattle, Washington is the largest city in the Pacific Northwest.  Separating Puget Sound and Lake Washington, and overlooking Elliott Bay, Seattle has a lush and damp climate that earned it the nickname "The Emerald City".  Well known for its iconic Space Needle building, Starbucks, and the University of Washington, Seattle is a diverse city with much to offer travelers of varied interests.  Reserve a rental car from Seattle Airport to begin your tour of the city.

You can choose from nine rental car companies which have information counters conveniently located in the Baggage Claim area.  The first five have car pick-up and drop-off at the airport on the first floor of the garage across from the Main Terminal.

Find the cheapest car rental deals in Seattle by booking in advance with us today. Our search engine will find for you the best offers on car rental discounts on 7 seater, 9 seater, luxury car or any type of car in Seattle-Tacoma International Airport. 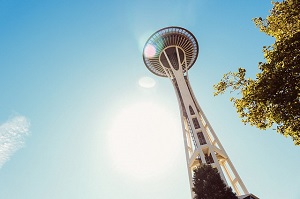 Several popular brews in the United States have their humble beginnings rooted in Seattle.  The Great Pacific Northwest Brewery Tour Company offers a tour to several of Seattle's best breweries, which includes transportation, tasters, a score card, and a souvenir glass.  However, you can always seek out the breweries on your own with a Seattle car hire.

Visit the most iconic building of the city and enjoy an amazing view on its revolving top.  The Space Needle is located at the Seattle Center.  From there you are close to other interesting buildings of the downtown area such as the Central Library, which features an enormous glass-fronted atrium and the Columbia Center, the tallest building in the Pacific Northwest.

Seattle has an abundance of parks where you can enjoy its many green spaces, forests, waters, and much more.  Olympic Sculpture Park is a creation of the Seattle Art Museum, and in addition to stunning views across the water it features sculptures built by famous artists.

Enjoy a scenic 2 hour ride on the water from Seattle to Bremerton.  The boat leaves from a pier at the south end of the waterfront and is less than $10 round trip.

Escape the city on a daytrip into the nearby Cascade Mountains.  Just an hour away by Seattle rental car, Snoqualmie Pass offers beautiful mountain views, hiking in the summer and skiing in the winter.

Stop in for a festival at nearby Leavenworth.  This Bavarian-stule town in the Cascade mountains has many German restaurants and shops and holds many festivals throughout the year such as Maifest, Autumn Leaf Festival, Christmas Lighting Festival, and Oktoberfest.  Reserve a cheap rental car in Seattle to join the festivities in nearby Leavenworth.