The Toulouse-Blagnac Airport, TLS, is located just 6.7 km northwest of Toulouse, just 20 minutes by Toulouse Airport car hire.  It is just south of Blagnac in the Midi Pyrénées region of France, and serves over six million passengers per year.

Stop in the airport's photo booth for some quick, cheesy memories, or plop down into one of their massage chairs.  Toulouse-Blagnac also features a wide selection of shops, bakeries and restaurants, and even a local produce.

Toulouse is located at the mid point between the Atlantic Ocean and Mediterranean Sea, a full 590 km away from Paris, it is the sixth largest metropolitan area in France.  The Ville Rose (Pink City) of France, Toulouse is known as a center of cutting-edge European technology, and boasts a myriad of renowned technological institutions to prove it.  Set up your car hire Toulouse Airport and find out what all The Ville Rose has to offer.

For cheap car hire in Toulouse, France, there are options convently located in the Arrivals Hall, in Toulouse Airport, here you will find desks for the following car rental companies:

We recommend to book your Toulouse Airport car rental in advance with us to get amazing car rental discounts. 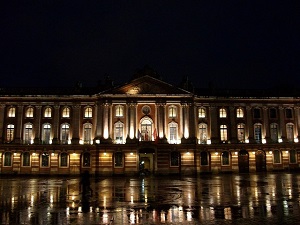 Visit the seat of the municipal administration of Toulouse.  While some of the interior of the Capitole can be traced back to the 16th century its façade is a pink brick Neoclassical style from 1750.  The Capitole houses the city hall, as well as the Hôtel de Ville, the Théâtre du Capitole (opera house), and the Donjon du Capitole.

The name bazacle comes form the Latin word vadaculum, meaning "little ford".  The Bazacle originated as a ford across the Garonne, and the first bridge across the Garonne was guilt here, where the water was shallowest.

This is also the place where a hydro electic power station was built in 1890 to supply toulouse with electricity.  Both the old and new turbines can be viewed in working state to this day.

This may be an important stop to make in your car hire Toulouse, France, as the city was actually founded to serve as the eastern terminus of the canal.  The original purpose of the Canal du Midi was a noble one, to avoid the long sea voyage around hostile Spain's Barbary pirates, a trip which took a full month, by cutting through from the Atlantic to the Mediterranean.

Take a trip through Toulouse, France by car hire and visit this public park and botanical garden on Alée Jules-Guesde in Toulouse.  This is the third site of the first botanical garden in Toulouse.  Founded in 1730, the garden didn't find its way here until 1794, in a place where the poorest of the city could collect medicinal plants.

In your visit to Toulouse, France perhaps you would be interested in seeing some artifacts from Far-Eastern and Egyptian civilizations?  Not exactly expected, but this eclectic collection, founded by a passionate amateur who travelled the world in search of ancient ant and artifacts is one of Toulouse's treasures.

Housed in a moorish villa, Georges Labit also contains an exotic garden, a specialist library, and a screening room.  The perfect day trip in your cheap car rental Toulouse, France.

You can explore so much from France, after you check out the Egyptian artifacts perhaps you would like to visit space?  Well not exactly, but you will get a lively experience of it at Toulouse's theme park oriented towards space and its conquest.

Visit full scale models of the rocket Ariane 5, Mir space station, and Soyuz modules.  They feature a planetarium with various showings throughout the day, and numerous exhibit