Vienna International Airport is both the biggest and busiest airport in Austria, serving over 19 million passengers per year.  Located in the town of Schwechat, 18 km southeast of central Vienna, it is often referred to as just Schwechat by locals.  Its an easy drive into Vienna by car hire Vienna Airport.

The airport has plans to expand set for 2015 with several new and respectively adapted buildings.  These will be a new tower including a night laser show, a new terminal, a third runway to start construction in 2010, and an enlargement of the existing underground railway station.

There are two public transport trains connection Vienna International Airport to the city centre.  The S7, which makes several stops along the way and takes a bit longer, and the CAT, which can traverse the 18 km in just 16 minutes.  However, the most convenient for a traveling schedule is to pick up your own Veinna Airport car hire upon arrival and have your ground transport taken care of for your stay in Vienna.

For car rental in Vienna airport you can find counters for main car hire companies in the Arrivals Hall at Vienna Airport. These car rental companies include:

Book your Vienna car hire vehicle in advance and get the cheapest deals on 7 seater, 9 seater, luxury car and all types of rental car for collection in Vienna Airport.

For cheap car rental in Vienna, Austria book in advance with us. The best way to tour Vienna is with your own rental car, this allows you to move around more comfortably and avoid the hassles of public transportation. Our book engine on the right will find for you the cheapest car hire offers in Vienna Airport.

The Viennese seem to be overly fascinated with death, hence this very popular Central Cometary.  Here there are more graves than living residents in Vienna.  You can often catch a strolling Schrammelmusik here, highly sentimental music with lyrics pertaining to death. 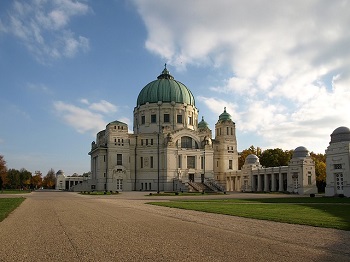 Vienna even has a museum devoted to coffins and mortuary science, called the Bestattungsmuesum.

Schönbrunn is the ultimate palace experience in Vienna, and listed as a UNESCO world Heritage site since 1996.  Its comparable in grandeur to Versailles, containing the oldest gardens and zoo in the world built in 1752.  The Palace Park offers many attractions, such as the Privy Garden, a Maze and Labyrinth, and the top-of-the-hill Gloriette featuring a Panorama Terrace.

Take your Vienna, Austria car hire over to Kreuzherrengasse 2 and visit the Largest Baroque cathedral north of the Alps.  Karlskirche was designed by the famous architect Bernard Fischer von Erlach.  Its amazing Frescos were done by Michael Rottmayr.  The church also features several paintings from the Italian Baroque painters Sepastiano Ricci and Giuseppe Antonio Pellegrini.

Vienna's MQ, or Museum District is not only a place for art, it is also an urban living space where people come to simply sit in a café or play a game of boccia.  Combination tickets are available for visiting more than one museum, making it cheaper than buying your entrance individually.

There are more than 20 interesting museums to visit outside the MQ that may be of interest as you drive around town in your car hire Vienna, Austria.

This marvelously created zoo contains a rainforest glasshouse, tiny apes, aquariums with sharks, and terrariums with reptiles and venomous snakes.  Making good us of unneeded space, the Haus des Meers was built in one of the leftover WWII air raid shelters, a so-called "Flakturm".  The building is designed to stand a direct bomb hit, an earthquake, and wind speeds at an overpressure of ten bar.

Looking for used Lederhosen?  Perhaps a doner kebab or an Austrian war bond from the first World War?  Primarily a flea market though you can find some stalls selling new items and food.  You never know what you will find here; couture gowns, Communist medals from all the former Eastern Bloc countries, tobacco pipes, broken pocket watches, give a daytrip to the Naschmarkt and see what treasures you can come out with.