San Francisco International is one of the largest airports in the world and features numerous passenger amenities, including a wide range of restaurants and cafes, great shopping options, public showers, a medical clinic, and assistance for lost or stranded travelers. You can get from SFO to the city (about 16 km) quickly and easily with your own San Francisco airport car hire.

San Francisco is the centerpiece of the California Bay Area, known for its scenic beauty, hilly terrain, Victorian architecture, and summer fog. You will likely recognize its Golden Gate Bridge, the main iconic image of one of the most visited cities in the world.

San Francisco is also known for its liberal community and its ethnic and cultural diversity, part of what makes the city such a lively and interesting tourist attraction. Reserve a car hire from San Francisco airport and enjoy the beautiful San Francisco Bay area.

We recommend to book your San Francisco Airport car rental in advance with us to get amazing car rental discounts. 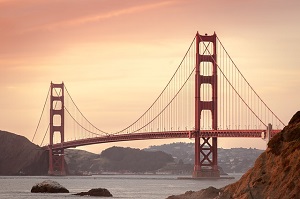 If you are driving into San Francisco from the north it will be the first thing you see of the city, as it is one of the major road routes into and out of the city. It has been called one of the Seven Wonders of the Modern World - definitely worth a picture or two!

Visit the district made famous for its association with hippy culture for some excellent eclectic shopping. Follow Stanyan Street down through Golden Gate Park to a popular site for relaxing and outdoor concerts.

Take your San Francisco rental car over to the Hyde Street Pier in Fisherman's Wharf where you can board and tour several historical ships. Highlights include the 1886 Balclutha clipper ship, a walking-beam ferry, a steam tug, and a coastal schooner. The area also has an old WWII submarine. If that’s not enough for you can visit the Aquarium of the Bay and the Wax Museum.

For the best view of the San Francisco skyline take a ferry ride across the bay to Sausalito. Spend the afternoon walking along the waterfront, where you can visit several nice restaurants, shops, and galleries.

Reserve a cheap rental car in San Francisco for a daytrip to tour the charming Wine Country about 70 miles north of the Golden Gate Bridge. Here you will find California's top wine producers: Alexander Valley, Dry Creek Valley, Russian River Valley, and Chalk Hill. Dining here is excellent, as well as the shopping and of course, the wine tasting.

Get off the concrete and explore the 560 acre forest of old-growth redwood trees in Mill Valley, just north of the Golden Gate Bridge. This is one of the few remaining places where these trees, the tallest living things on the planet, can be seen in their full glory. Many are over 2000 years old. Boardwalks and walking trails help you get close to the magnificent trees.