The Aeroporto di Napoli is located 5.9 km northeast of the city of Naples, Italy in the Capodichino district. It has two terminal buildings: Terminal 1 is for departing travelers and Terminal 2, located away from the airfield, is reserved for charter operations.

Naples Airport has easy access to the city thanks to the exit of the so called "Tangenziale", an urban highway (A56) which connects the city of Naples to the Metropolitan area and highways of Rome. While you can take a taxi or the Train from the airport to your hotel or destination, by far the most convenient is to drive yourself on your own time with a Naples Airport car hire.

Located between two volcanic areas, the volcano Mount Vesuvius and the Phlegraean Fields, Naples occupies a lush and rich area of Italy's coast. The city is known for its rich history, art, culture, architecture, music and gastronomy. Plan for your Naples vacation ground transportation to await your arrival with a car hire Naples Airport.

Booking your car hire vehicle for Naples Airport in advance is the best way of getting the best deals and cheap car rental offers in 7 seater, 9 seater or any type of car hire vehicle you need for your stay in Naples, Italy.

Start your sightseeing in the central and main open city square or piazza of the city. Bordered on the east by the Royal Palace and on the west by the church of San Francesco di Paola, there will be plenty to see and explore from this square. Nearby is the Teatro di San Carlo, the oldest and largest opera house on the Italian Peninsula. 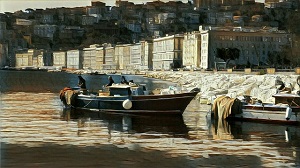 Naples is well-known for its historic castles, and the ancient Castel Nuovo is one of the most notable of the city, as well as an architectural masterpiece. Also known as Maschio Angioino, it dates back to the first king of Naples.

As the home of the Archdiocese of Naples, the Catholic faith is highly important to the people of Naples and you can find literally hundreds of churches in the city. Take your Naples car hire around to some of the most extravagant and notable, such as the Cathedral of Naples, Santa Chiara, Gesù Nuovo, and Santa Maria La Nova, plus many many more!

The islands of Procida (made famous as the set for the film II PostinoI), Capri and Ischia make a perfect daytrip from Naples. Transport to the island is easy and fast with hydrofoils or ferries.

With a car hire Naples you can travel to the ancient Roman ruins of Pompeii, Herculaneum, and Stabiae. Stabiae was destroyed in the 79 AD eruption of Vesuvius, and while it may not be as well known as the historic city of Pompeii, it is still well worth a visit. All are located nearby the city.

Underneath Naples there is a series of caves and structures created by centuries of mining. About one kilometer of these tunnels under the city can be visited from Napoli Sotteranea, located in the historic city centre in Via dei Tribunali. Get out of the city for a very different Naples experience underground.

Save on your Italian vacation in Naples by reserving a cheap car rental Naples online in advance.