In January 2011 the airport combined their Terminals 1   The merger was intended to improve operational efficiency and create a larger passenger security search area.  In May 2014 a runway extension was completed and there are further plans to improve the airport in the future.

With business booths and free work stations, overhead projectors and meeting rooms Birmingham International has all the facilities you may need for your business .  They also have ATMs, an extensive range of cafes and restaurants, 25 shops, and disabled accessible toilets and lifts.

Make sure to get the best deal on cheap car rental in Birmingham, England - the way to save and tour the local attractions at your own pace.

Book your Birmingham car rental vehicle in advance and get the best discounts on 7 seater, 9 seater, luxury car or any other type of rental car you require to make your stay in Birmingham easier and more comfortable. Use our search engine on the right to find the cheapest car rental deals for collection at Birmingham Airport.

Designed by the English Baroque architect, Thomas Archer, Birmingham Cathedral has been a place of Christian worship since 1715.  Located in the centre of Birmingham, it is open every day of the year.

Make it your first stop in town with your car hire from Birmingham International Airport. 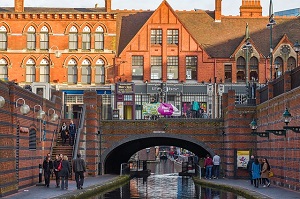 Make a visit to see the inspiration for JRR Tolkien's 'Hobbiton' in Lord of the Rings.  At 200 years old, this watermill is one of only two standing, out of more than seventy which once occupied the riverbanks around Birmingham.

Boasting the most seats sold per year of all British theatres the Birmingham Hippodrome is a must see.  A true work of art, it was recently renovated to the tune of £35 million, its 2000 seats bare witness to only the best of London's musicals and the UK's biggest, most spectacular pantos.

Although best known as the Victorian 'workshop of the world', Birmingham has a rich heritage dating back as far as the Middle Ages.  To fully appreciate the full range of the city's heritage you must spend a day at the Birmingham Museum and Art Gallery.

Boasting the largest collection of Pre-Raphaelites in the world, admission is free and the museum is open every day of the week.  Located in Chamberlain Square it will just be a short drive by car hire from other key locations around the city of Birmingham.

Don't miss out on one of the most acclaimed classical theatre companies in the world, and visit Stratford-upon-Avon while you're at it, the town where William Shakespeare was born and died.

The Royal Shakespeare Company has three theatres in Stratford, attracting the finest actors and millions of visitors from around the world.  At just an hour's drive from Birmingham city centre, this is the perfect day trip to see the country in your car rental from Birmingham, England.

Not sure what you're interested in?  With a group of varied interests?  Visit the World Historical Site of Ironbridge Gorge for a chance to visit 10 different museums.

Choose from Blists Hill Victorian Town, the beautiful gas-lit galleries of Jackfield Tile Museum, view priceless treasures at the Coalport China Museum, or exercise your imagination at Enginuity, the museum to discover how every day objects are designed.