Coming in to Russia you may choose the oldest operating airport in Moscow, Vnukovo Airport, VKO.  This international airport is one of the three major airports serving Moscow and it is host to over 8 million passengers per year.

Located 28 km southwest from the centre of Moscow, while not the closest airport to the city centre it is a scenic drive by Moscow Airport car hire. Moscow is a major economic centre, complete with a variety of scientific and educational institutions and numerous sport facilities.

Sometimes called The Third Rome, Whitestone, The First Throne, or The Forty Forties, the Muscovite culture here will prove to be worth your while.  Hop on the busiest single-operator subway in the world, or preserve your personal space in a car hire Moscow Airport.

For car rental in Moscow Vnukovo Airport you will find a variety of car rental companies at the Arrivals Hall in the airport.

Booking your car hire vehicle for Moscow Vnukovo Airport in advance is the best way of getting the best deals and cheap car rental offers in 7 seater, 9 seater or any type of car hire vehicle you need for your stay in Moscow, Russia.

Looking much like the inspiration for Disneyland, the amazingly colorful onion domes topping this cathedral are a unique sight to say the least.  Nothing similar can be found in the entire millennium of Byzantine tradition from the fifth to fifteenth century.

The Cathedral of Intercession of Theotoks on the Moat, or the Cathedral of Basil the Blessed is a Russian Orthodox cathedral dating back to 1561.  Standing on the Red Square in Moscow it marks the geometric center of the city and the hub of its growth since the 14th century.  Perhaps the geometric center isn't a bad place to start your way around town by Moscow, Russia car hire? 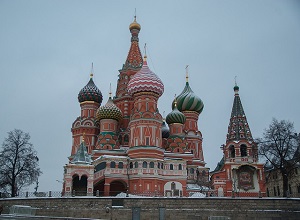 This hyperboloid tower was one of many designed by Vladimir Shukhov, built between 1919 and 1922 as a transmission tower for a Russian Broadcasting tower.  Today the Shukhov Tower in Moscow is at the top of UNESCO's Endangered Buildings list with an international campaign to save it.

There is more than one way to cross the Moskava River, but if you have the chance to pass this way at night the Kiev Bridge, or the Bohan Khmelnytsky is a is a stunning way to do so.  When the fantastic steel work of this walkway is lit up at night it reflects pure brilliance.

Built from re-used steel from the old steel arch, its main pedestrian walkway and stairs are completely enclosed in a glass canopy, with two open-air side walkways.  There is also a Krasnoluzhsky Road Bridge for your car hire Moscow, Russia if you're not too keen on walking once you get to the other side.

Founded by a wealthy patron of the arts, this most notable art museum in Moscow houses the works of the Classic Russian tradition.  Pavel Tretyakov donated his large private collection to the city, featuring pre Revolutionary painters such as Ilya Repin and the works of early Russian icon painters.

Central Park of Culture and Rest and Neskuchniy Garden

The Central park is an excellent place to bring children or come for a day of entertainment.  Located along the Moskva river it contains estrades, children's attractions, tennis courts, and other sports facilities.

Along its border is the oldest park in Moscow and the former residence of the Emperor, Neskuchniy Garden.  The main feature of the garden is the Green Theater, one of the largest open amphitheaters in Europe with a capacity of up to 15 thousand people.

Visit the largest botanical garden in Europe.  Here you will find live exhibition of more than 20 thousand different species of plants from different parts of the world.  The collection features a rosarium with 20 thousand rose bushes, a dendrarium, and an oak forest with average age of trees exceeding 100 years!