The airport is located at the centre of the Switzerland's road network, making it easy to travel by car hire Zürich Airport to connecting cities such as Bern, Basel, and St Gallen.

According to several surveys from 2006 to 2008 Zürich was named the city with the best quality of life in the world as well as the wealthiest city in Europe.  With this you may not be surprised you to encounter the hustle and bustle, as Zürich Airport and railway station are the largest and busiest in the country.  Dodge the crowd from the Airport Zürich by car hire.

Book your Zurich car hire vehicle in advance and get the cheapest deals on 7 seater, 9 seater, luxury car and all types of rental car for collection in Zurich Airport.

For cheap car rental in Zurich, Switzerland book in advance with us. The best way to tour Zurich is with your own rental car, this allows you to move around more comfortably and avoid the hassles of public transportation. Our book engine on the right will find for you the cheapest car hire offers in Zurich Airport.

There are several churches around Zürich dating back before the year 900, but St. Peter Church holds the largest church clock face in the world. Now that's a face worth looking into!  Located just downstream from the Fraumünster. 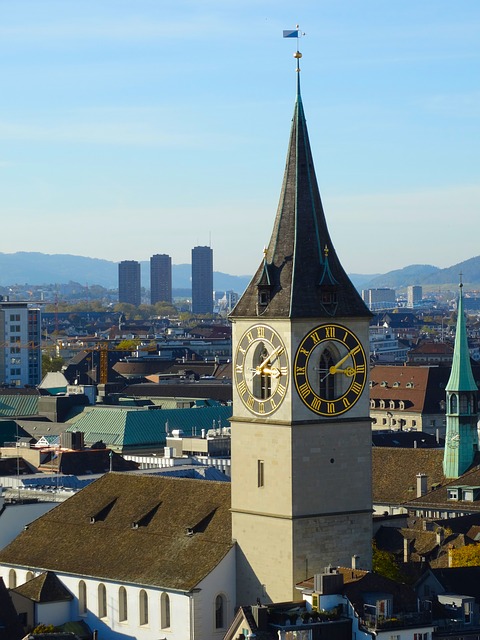 Head to the top of this hill for your prized panoramic shots of the city. Uetliberg is located just to the west of the city 813 meters above sea level. Pack a picnic in a cheap car rental Zürich, Switzerland and make an inexpensive trip to look out on the city.

Ever wondered where all that money goes said to exist in Swiss accounts?  Paradeplatz Plaza in the middle of Bahnhofstrasse, Zürich holds the world-headquarters of several Swiss banks including UBS and Credit Suisse. Maybe you'd like to stop in and open an account?

One of the largest collections of Classic Modern Art in the world.  For those outside the field of art it you may not seek out an art museums in every city you visit, but it would be a shame to visit Zürich and miss out on the Kunsthaus collection of works by Munch, Picasso, Braque, Giacometti, and more.

The Zunfthaus are the Guild houses lining the Limmat river.  These include Rüden, Haue, Saffran (merchants of textiles and spices), Shneidern (originally tailors), Schmiden (originally blacksmiths, silver and goldsmiths, clockmakers and physicians), and Zimmerleuten.  Although the old guilds ceased to be tied to specific trades in the 19th century, their rich history is preserved today mostly as restaurants and taverns.

Cruise and stop along the Limmat river and take in an afternoon with Zünfte of Zürich, Germany by car hire.

Visit this lovely street during the winter for a storybook view of Zürich's main shopping avenue.  Bahnhofstrasse known as one of the world's most expensive and exclusive shopping avenues, including shops like Chanel, Louis Vuitton, Giorgio Armani, Cartier, Bvlgari, Salvatore Ferragamo, Dior, and Tiffany and Co.

Although that little blue box from Tiffany won't take up too much space you may want to plan a car hire Zürich, Germany to safely transport yuou and your family or friend.