The largest city in North America, Mexico City is huge, encompassing around 250 colonias or neighborhoods. The majority of tourist attractions will be found in the Federal District, but the city's amazingly diverse attractions and nightlife ranges across its 16 districts and includes nearly every imaginable combination of dance hall and night club. Reserve a Mexico City Airport car hire to await your arrival and enjoy a great night out during your stay.

The car rental offices in Mexico City International Airport are not all grouped in the same location.

In Terminal 1, inside the National Arrivals Gate (A) Baggage Claim Area you will find service desks for the following car rental providers:

The following car rental providers are located in Building "C" of Terminal 1:

In Building "D" of Terminal 1 you will find Alamo and Gold Car car hire providers, and on the first level of Building "A" is a service desk for the car rental provider Sictel.

In Terminal 2 of Mexico City International Airport the car rental service desks are located either in the National Arrivals or the Arrivals Triangle.  These include:

Mexico City has more museums than any other city in the world. Find that hard to believe? New York City actually comes in second, and London third. A day of museums would certainly not be enough to cover even the greatest and most interesting of museums in Mexico City by car hire, but the place to start is with the list of two dozen or so most popular. Check out Mexico's amazing National Museum of Anthropology to learn about ancient Mexican cultures, see the Frida Kahlo paintings in the Museum of Modern Art, and don't miss the Papalote Children's Museum if you are visiting Mexico City with young ones.

Of all things fantastically Mexican, the Mexican Free Wrestling is a tourist attraction worth writing home about.  Head to the Arena Mexico in your cheap car hire for an affordable afternoon of Mexico's favourite, and an entertaining show. 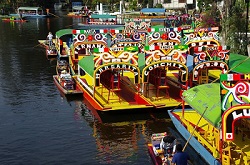 The Venice of Mexico, Xochimilco is a stunning creation of waterways and an impressively preserved piece of Aztec history. The flower gardens, vividly painted boats carrying mariachi and marimba bands, and floating bars taquerias are the last remnants of how Mexico City once looked before the arrival of the Spanish in 1521.

To escape the city for a day and enjoy some fun in the sun plan a day trip by car rental from Mexico City to Oaxtepec. The waterpark here is a great place to enjoy with your family, or adults can kick back and relax in the lovely accommodations here, complete with sauna and Olympic size swimming pool.

The true scale, importance, and advancement of ancient Mexico can not fully be appreciated until you view the impressive structures left by its people. Take a car rental from Mexico city to the nearby ancient city of Teotihuacan, where you can visit giant, pre-Colombian pyramids.

If a short day trip is all you have time for during your tour of Mexico City by car rental then the place to go for some greenery would most definitely be Desert of the Lions. Just 20 minutes away by car hire, this forested place is the ideal location for a light day hike.