Indian legend estimates Delhi to be over 5,000 years old, though the earliest historically recognized version of the city only dates back to the 10th century AD. Either way it’s still one of the world's oldest cities. Delhi and the area of the Indian capital known as New Delhi are rich with history and a unique culture. Reserve a car hire from New Delhi Airport for your Indian vacation.

Indira Gandhi International Airport is located in the west of Delhi and offers easy access to the ring roads of the city. It is a modern facility with three terminals, terminals 2 and 3 being used for international flights. Terminal 1, which is dedicated to domestic flights, is commonly known as Palam Airport. If you plan your travel to Delhi in December or January you should be aware that there are often significant delays due to dense fog. 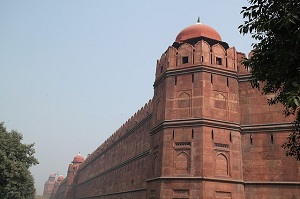 This large structure is a top tourist sight in Delhi and houses several attractions. Chatta Chowk is a covered bazaar, Diwan-i-Am is a hall featuring a marble platform with an emperor's throne, Mumta Mahl is a jewel palace, and there are several more. Reserve a car hire from New Delhi Airport for your tour of the Red Fort.

The tomb itself is interesting enough, but the real attraction here is the immaculately kept gardens which surround the tomb, probably the best in Delhi. The complex contains three tombs, that of Iza Kahn, Hanayun, and Babur,

Plan an evening to enjoy sunset, followed by a light show in this beautiful gardens. The structures here date back to the 1200s and the minaret was the tallest skyscraper in the world until around 1400!

Though the drive and visit will take an entire day, you might as well visit the Taj Mahal, which is only 3-6 hours away in Agra. You can book tickets on a train, or reserve a car hire in New Delhi for the journey.

The Dalai Lama is also relatively close by in Dharamasala, the seat of his government in exile. Just 10-12 hours to the north. If you have plenty of time to spend in the area why not take a cheap car hire from New Delhi and enjoy the scenery along the way.