This award winning airport also houses an open-air aircraft museum in their Terminal 2. After a visit to their museum you can set out for the sights of the city in your Budapest Airport car hire.

Book your Budapest car hire vehicle in advance and get the cheapest deals on 7 seater, 9 seater, luxury car and all other types of rental car for collection from Budapest Ferihegy Airport.

For cheap car rental in Budapest, Hungary book in advance with us. The best way to tour Budapest is with your own rental car, this allows you to move around more comfortably and avoid the hassles of public transportation. Our book engine on the right will find for you the cheapest car hire offers in Budapest Airport. 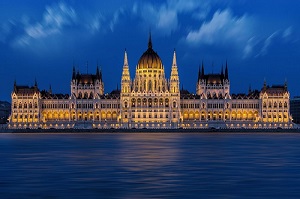 The neo-Gothic Parliament building is a stunning example of mastery in architecture.  Inside you will find treasures such as the Hungarian Crown Jewels.

It can be visited by land with your Budapest car hire or from the water, where an amphibious sightseeing bus provides excellent views of its exterior.

If you want to experience the culture of Budapest make sure to stop off for some traditional Hungarian cuisine and café life. Although your options around town will include many recognizable favourites and fast food, you can get the real deal at an authentic and world famous Hungarian eatery in one of the Mátyás Prince Restaurants.

A true jewel of Budapest, the Seven-Hundred year-old Matthias church and its surroundings should definitely be on your list of things to see.  Next to the church is an equestrian statue of the first king of Hungary, King Saint Stephen.

Just behind that is the Fisherman's Bastion, which opens out to a panoramic view of the whole city, a great place to plot your route with your car hire in Budapest, Hungary.

This building has seen a devastating series of battles and wars ever since the thirteenth century.  The Palace is known as one of the symbols of Hungary and today it houses two impressive museums, as well as the National Széchenyi

The historic Castle Hill, the River Danube embankments and the whole of Andrássy út have been officially recognized as UNESCO World Heritage Sites.  There are three churches in the Castle District, six museums, and a whole days worth of interesting buildings.

Traverse this historic area by cheap car hire from Budapest airport and enjoy viewing all Budapest has to offer at your own pace.

Maybe you didn't come to Budapest to get these kind of kicks, but located just outside the city is a theme park, with a very different theme indeed.  In between the thrills and excitement you can admire several striking statues of the Communist era, interesting to say the least!