Located 28 km northeast of Turkey’s capital, Ankara, Esenboga International Airport, ESB, is an elegant and award-winning location for your arrival in Turkey.  Its name comes from the village of Esenboga (the ‘g’ is silent), which literally means “healthy bull”.  The “Healthy Bull” is less than 30 minutes from the city with your Ankara Airport car hire.

Esenboga International was awarded back in 2009 the best airport in Europe by ACI Europe (Airport Council International).  This made history as it was the first time the award was granted to a Turkish Airport.  A large deciding factor for the judges was Esenboga's work in the area of environmental innovation, securing an incredible 25% energy savings stemming from its recycling of exhaust gases to power its air conditioning.

Transportation to the city centre is available by taxi (around TRY 45 one way), bus (around TRY 11 one way), or you could go the easy route and book a car hire from Ankara Airport.  The road was recently expanded between Esenboga airport and Ankara's centre, reducing the drive time by several minutes.

Booking your car hire vehicle for Ankara Airport in advance is the best way of getting the best deals and cheap car rental offers for 7 seater, 9 seater or any type of car hire vehicle you need for your stay in Ankara, Turkey. 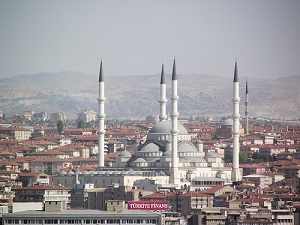 The Temple of Augustus and Rome in Ankara is one of the oldest existing Roman temples, built between 25 BC - 20 BC. A copy of the text Res Gestae Eivi Augusti was inscribed on both walls inside the pronaos in Latin, with a Greek translation on an exterior wall of the cella. This text recounted the deeds of the first Roman Emperor Augustus and was the most intact copy in existence.

Travel through Ankara, Turkey by car hire to the Ulus quarter.  Situated next to the Temple of Augustus, this Seljuk style mosque was built in the early 15th century in honour of Haci Bayram Veli, whose tomb is next to the mosque.

The original architect who created this mosque in the Seljuk style is unknown, but it was later restored by Mimar Sinan in the 16th century.  A later restoration in the 18th Century brought the addition of Kütahya tiles, completing this masterpiece's interior.

No visit to Ankara would be complete without a visit to its logo, as the symbol derived from this monument has been used as the logo of the city for a long time.  Built in the 1970s, this impressive monument symbolizes the Hatti gods and commemorates Anatolia's earliest known civilization.

Save on a cheap car rental in Ankara, Turkey and head over to Sihhiye Square to see Ankara's signature monument.

Don't forget to pick up some souvenirs for your friends back home (and a thing or two for yourself).  Selected as "Europe's Best Shopping Mall" by the ICSC in 2003, Armada Shopping centre is a dazzling construction with all the shops you will enjoy.

With the freedom of a car hire in Ankara you can plan to spend the day in this expansive recreational farming area.  Here you can enjoy a zoo, several small agricultural farms, greenhouses, restaurants, a dairy farm, and a brewery.  You can plan a picnic, go hiking, biking, or simply enjoy good food and nature.

Come and view the rich history of this area with its ancient civilisations.  At the entrance of Ankara Castle, what was once an old covered bazaar has now been beautifully restored and houses a unique collection of Paleolithic, Neolithic, Hatti, Hittite, Phrygian, Urartian, and Roman works.