Baltimore is a popular destination both for its proximity to Washington, D.C., and as a centre for tourism and travel itself.  Boasting a lively and thriving nightlife, a great cityscape on the Chesapeake Bay, and a friendly, Mid-Atlantic atmosphere, many travellers prefer Baltimore to other large US cities like New York.  Hire a Baltimore airport car rental to pick up on your arrival in the city.

The Car rental office facilities servicing Baltimore-Washington International Airport are actually located in a centralised facility off site.  An airport shuttle bus is available to take travellers to and from the car rental office facility, which will only add an extra 10-15 minutes to your travel plans from Baltimore airport.

The car rental providers at Baltimore Airport include the following: 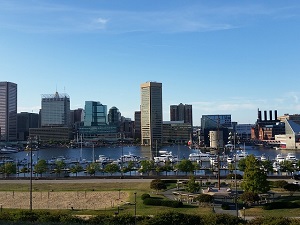 The Inner Harbour is your one-stop touristy thing to do in Baltimore, but don't let that deter you, the attractions here are part of what puts Baltimore on the map.  Families will enjoy the many museums here like the Maryland Science Centre and the American Visionary Arts Museum, as well as the National Aquarium.  Other Baltimore Harbour attractions include live music and plenty of eating and shopping.

Head over to the Fells Point neighbourhood in your Baltimore car hire for the widest selection of great restaurants as well as bars and breweries in the city.  In particular, Fells Point is home to the DuClaw Brewing Company - a great place to sample a wide selection of locally made craft and seasonal beers.  Also worth checking out is Max's on Broadway, where you can choose from a long list of rare beers from around the world.

Visit one of the most impressive zoos in the United States during your stay with your Baltimore car rental.  The Maryland Zoo is located in Druid Hill Park, and is not too far from another popular attraction, Edgar Allen Poe's House.  It's easy enough to make a tour of both all in one afternoon.

Since you're so close you might as well add a visit to the nation's capital by car hire to your stay in Baltimore.  In fact, many travellers are just passing through Baltimore on their way there but, for everyone else, it can make for a novel day trip just to tour the monuments in the National Mall.

Like the Baltimore area enough to move there?  Nearby Ellicot City is ranked as one of the top towns to live in in the country.  Aside from its proximity to such a wonderful metropolis, Ellicot offers tourists a lovely historic Main Street, complete with old-timey charm.  Have lunch there at one of its upscale cafes.

After the country's capital city you can visit the lovely little state capital of Maryland, as well as the sailing capital of the United States.  Annapolis is historic, charming, and really into boats.  A fun afternoon in Annapolis can be spent walking around the town's historic downtown harbour, shopping and eating seafood in the local establishments.