Visit the Middle East with a car rental in Kuwait.  Bordering the countries of Iraq and Saudi Arabia, Kuwait is situated at the head of the Arabian Gulf in a vast, dry desert.  Travel by car rental in Kuwait is easy as all road signs are printed in both English and Arabic, and roads are made and named in very logical order. 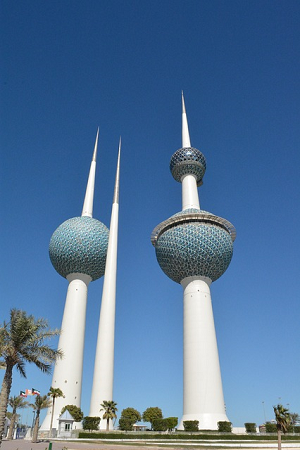 Pick up your Kuwait car rental from the country's only airport, the Kuwait International Airport.  Served by an increasing number of international airlines including British Airways, United Airlines, Lufthansa, and KLM, finding a flight a flight into Kuwait is not difficult.

Although not well known as a vacation destination, there are plenty of ways for business travelers and those passing through Kuwait to enjoy their stay.  The country has few geographical features other than desert, but one notable feature worth visiting in your Kuwait car rental is the Kazmah Desert cliffs.  From atop the cliffs you can get a lovely view of the bay below.

Some of the greatest features of Kuwait are its artificial attractions, like sea clubs, spas, golf courses, and shopping malls.  Escape the dusty desert for a day at an indoor swimming pool, tennis courts, or bowling.  Head to the artificial landscaping of the Sahara Club for a round of 18 holes and dine at their five star restaurant.  Shop to your heart's delight at one of the Middle East's largest shopping malls, The Avenues.  Featuring VIP theaters completel with a personal butler, this upscale shopping experience includes plenty of clothing and electronics stores.

Get the most out of your stay in Kuwait with a cheap car rental from CarHireX.com.