Chicago Midway International Airport operates as a low cost hub fora number of carriers, and predominately Southwest Airlines, where it is the centre of the companies largest operation.

When O'Hare International Airport opened the airport saw a rather predictable reduction in traffic, but since then has seen national traffic growth.

If you are renting a car from the airport the Stevenson Expressway provides a direct route to Downtown Chicago.

Chicago Around The World 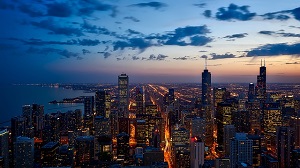 No visit to Chicago is complete without a trip down Wentworth Avenue, into the heart of Chicago's Chinatown.  Stop there for lunch and do a little shopping, then visit some of the other worldly neighborhoods in Chicago.  Notable Indian food and Bollywood videos can be found on Devon Avenue in Rogers Park; Pilsen and Little Village serve up so much authentic Mexico their signs are in Spanish, and Poland is aptly represented in the communities in the city's Far Northwest and Southwest sides.

Sandy beaches, suntans, and swimming; though it might come as a surprise the shores of Lake Michigan are a great summer destination.  Visit the waterfront parks for volleyball and soccer games, or just relax by the water.  Any time of year you can enjoy beautiful skyline views from Promontory Point at Hyde Park.

For shopping of a different kind take the three hour drive by car rental and do some antiquing in Galena.  This scenic little town is also great for hiking and generally escaping the city for a day.

After the museums, the theatre, and all the other cultural attractions that have your kids itching for something more exciting, take them 40 minutes north of Chicago to Six Flags Great America!  Nothing says "vacation" like screaming your head off on a giant roller coaster.