Reserve a car rental in Kosovo for your next holiday.  One of the few states which does not require a visa from visitors, Kosovo offers a unique opportunity for travelers by car rental to tour the beautiful mountains and ancient ruins of South Eastern Europe.  Bordered by the countries of Albania, Montenegro, Macedonia, and Serbia, Kosovo is a gem of the Balkans. 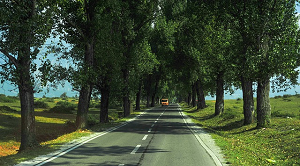 Pick up your Kosovo car rental from Pristina International Airport.  Now offering frequent connections to major cities via British Airways, Scandinavian Airlines, Turkish Airlines, Austrian Airlines, and more, it is far easier to travel directly into Kosovo than it has been in years past.  It is also possible to pick up your Kosovo car hire from the Pristina Resort.  To proceed with your reservation simply select from one of these pick up locations and complete the booking engine at the top of the page.

Beginning your tour of Kosovo by car rental from the capital city of Pristina you will have the opportunity to visit several wonderful attractions and natural wonders.  The National Museum of Kosovo as well as the old mosques of the Ottoman Empire are located in Pristina, but it is outside the city where you can visit the most impressive natural attractions.  Check out the waterfall of the Drini River north of Peja and the nearby Rugova Gorge, or visit in winter to ski the great Brezovica Ski slopes of Southern Kosovo.

Save the most on your Kosovo car hire by booking online today through CarHireX.com.  We offer the lowest car rental rates in the Balkans, and across Europe.