Hire a car rental in Guatemala for an unforgettable tour of Central America.  Guatemala features a long Pacific coastline as well as a small stretch of coast on the Caribbean.  It borders Mexico in the north, Belize in the northeast, and Honduras and El Salvador in the south.  This region of the world features a rich and distinctive culture created by the blend of ancient Mayan peoples and influences from Spain.  Add to that the breathtakingly beautiful natural setting and mild tropical climate and Guatemala makes for a perfect travel destination by car rental. 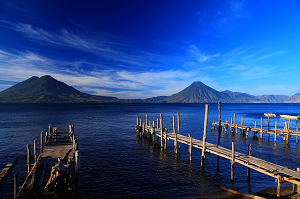 A car rental in Guatemala is essential for touring the numerous natural and ancient sites throughout the country.  Guatemala is scattered with Mayan ruins, and is home to the famous Tikal site, long considered the largest Mayan ruins in existance, as well as El Mirador; a site still being uncovered which may be even larger than Tikal and some experts speculate that El Mirador could be the cradle of Mayan civilization.  While the Mayan sites are amazing attractions, you shouldn't miss a trip to see the impressive volcanoes of Guatemala, some of which reach over 3,000 meters high!  Save the most on your Guatemala car rental by booking through CarHireX.com.