The Republic of Cyprus is the third largest island in the Mediterranean after Sicily and Sardinia.  Surrounded by beautiful turquoise waters and featuring a mild, Mediterranean climate, Cyprus is geographically in Asia though it associates politically as European and is a member of the European Union.  You can pick up a car rental from Larnaca International Airport for your stay in Cyprus. 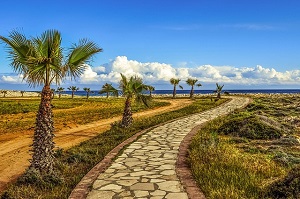 The majority of visitors to Cyprus will arrive to the island through the Larnaca Airport, which offers connections to most major European cities as well as most Middle Eastern capitals.  It is also possible to reach Cyprus by ferry or boat from Greece, Israel, Italy, Portugal, Southampton, and a few other European ports.  Though there is a ferry service from Turkey connecting to the northern part of the country the only internationally recognized, and therefore recommended ports of entry are in the southern portion or the Greek parts of Cyprus.

Cyprus is well known for its scenic beauty and rich historical sites.  There are several archaeological sites to tour by car rental in Cyprus, many of which date back to the New Stone Age and the Roman Empire.  Among the most popular historical attractions on the island is the Hamam Omerye in Nicosia, Cyprus.  In these restored baths you can relax and rejuvenate in as people have done since the 14th century, in a site of great significance to multiple ruling cultures through the history of Cyprus.

To save the most money on your Cyprus car rental make your reservations online through CarHireX.com.  Begin by selecting your pick up location from the list below then complete the booking engine located at the top of any page.