Tour the Balkans of Central Europe with a car rental from Croatia.  A diverse and beautiful destination, Croatia consists of Lowlands, Littoral Croatia, Mountainous Croatia, and more than 1,000 islands.  Located just across the Adriatic Sea from Italy, Croatia borders Slovenia, Hungary, Bosnia and Herzegovina, Serbia, and Montenegro.  Pick your Croatia car hire up at the Zagareb International Airport or select from one of the popular pick up locations listed below. 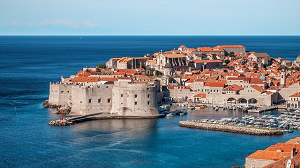 Getting into Croatia is easy by car rental from just about anywhere in Central Europe.  It is common for travelers to pick up a car rental in one of the Balkan countries and drive to the neighboring countries.  Border crossings are friendly, but it is still just as important to have the proper paperwork and identification handy as an arrival to the airport.  There are not currently any flights into Croatia from outside of Europe, but frequent connections are available from most major airports in Europe to Zagreb, and many locations also fly directly to Split and Dubrovink in Croatia.

Croatia is known for many things, but in tourism it is a popular spot for Naturists.  You can find more than 20 official naturist (or nudist) resorts in Croatia and several nude beaches.  Other top attractions in Croatia are its lighthouses, several of which can be reserved as accommodations during your stay.  Croatia is a great destination for shopping as the country has several excellent designers and goods are generally far less expensive than elsewhere in Europe.

Reserve your Croatia car rental to await your arrival at the airport in Zagareb, or select from the list of other airport, train station, and popular car hire pick up locations in Croatia below.  Proceed with your reservation by completing the booking engine at the top of any page.