The People's Republic of China is a vast country whose history and civilization are among the world's oldest, rivaling that of Mesopotamia and Egypt.  It also happens to hold the world's largest population, which varies greatly in culture, language, customs and economics.  Travelers by car rental will likely begin their visit in one of China's major cities such as Beijing, Gangzhou, or Shanghai, which are each rather wealthy and modern in contrast to the other 50% of China's population; some 800 million rural residents. 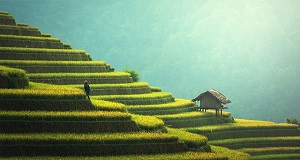 Most major cities in China have international airports, though the majority of international flights arrive to Beijing, Shanghai, or Guangzhou.  Many international flights will be routed through Hong Kong, South Korea, Japan, or Southeast Asia.  It is also possible to drive to China by car rental from several of it's 14 bordering countries including Vietnam, Laos, Pakistan, Hong Kong and Macau.  In addition, you can travel to China by ferry from South Korea, Japan, Taiwan, or Thailand.  Pick up your China car rental from any of the major international ports or popular locations in the list below.

In most instances your car hire in China will come with a driver, and this is for the best.  China is known for its chaotic driving conditions.  International Driver's Licenses are not recognized in China, and to drive yourself you would need to obtain a Chinese license.

Enjoy your tour of China from wherever in the vast country you choose to pick up your car rental and save the most by booking through CarHireX.com.  Our rates on car rentals with or without a driver are the lowest from Beijing, Shanghai, and Shenzhen.  Simply choose your pick up location from the list below and then complete the booking engine at the top of the page with the rest of your travel information.