Named after the former Turkish Prime minister, Izmir Adan Menderes International Airport, ADB, is located in the Gaziemir area of Izmir, about 18 km southwest of the city.  By Izmir Airport car hire it is on the way to Selçuk, Ephesus, and Pamukkale.

In 2006 the Adan Menderes Airport opened a new international terminal, and now the airport serves about six million passengers per year.  Izmir sits along the outlying waters along the Gulf o fIzmir, by the Aegean Sea.  Its a historic city, and has carried a civilization for nearly 3,500 years.  Take off in your car hire Izmir Airport and explore this Turkish wonder.

Booking your car hire vehicle for Izmir Airport in advance is the best way of getting the best deals and cheap car rental offers in 7 seater, 9 seater or any type of car hire vehicle you need for your stay in Izmir, Turkey.

The Tomb of Tantalus

Visit Mount Yamanlar, the site of the supposed tomb of the Greek mythological character Tantalus.  His story is sad and twisted, as most dramas of the Greek gods are, and if his body is here then the his spirit is somewhere trapped below fruit kept eternally out of his reach and above a pool of water eternally shrinking away from him.

Pretty steep punishment, but he supposedly killed his infant son and fed him to the goddess Demeter, something both Zeus and the Greeks felt was very tabu.

The Tomb of Tantalus was first explored in 1835 by Charles Texier and is an example of the historic traces in the region prior to the Hellenistic Age.

One of the more pronounced elements of Izmir's harbor and a must visit by car hire Izmir, Turkey, the 25 m marble Izmir Clock Tower stands brilliantly in the middle of the Konak district.  Designed in 1901 for the 25th anniversary of the ascension of Abcülhamid II to the Ottoman throne. 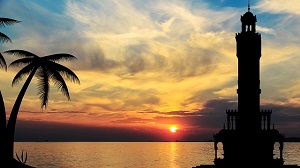 The tower features four fountains, placed around the base in a circular pattern with North African inspired columns.

One of the three historic castles of Izmir, Sancakkale was vital to Izmir's security for centuries.  Situated in the present-day Incirati quarter between the Baçova and Narlidere districts, on the southern shore of the Gulf of Izmir.

The Castle stands at a key point where the straight allows entry into the innermost tip of the gulf at its narrowest, and due to shallow waters through a large part of this strait many ships have sailed close to the castle.

Smyrna was an ancient city unearthed in two sites within Modern Izmir.  Agora of Smyrna was built during the Hellenistic era and its remains exist today as the space of Izmir Agora Museum in Izmir's Namazgah quarter.

Here you will find several different ancient structures including the base of the northern basilica gate, the stoa, the ancient shopping centre, and the many columns of the agora.  Drive through Izmir's Namazgah quarter in a cheap car hire Izmir, Turkey, and explore this rare preserved ancient city.

Karatas is the traditional Jewish quarter in Izmir.  This area is home to several historic synagogues, including the Beth Israel, Izmir's largest synagogue.  It is also home to Asansör, meaning literally "the elevator", built in 1907 to allow people to climb to the elevated part of the area that is separated by the coastal strait by a steep cliff.

Take yourself out to lunch in the Çesme district in Izmir, Turkey car hire and experience this district's signature sandwich.  Kumru is a special kind of sandwich featuring cheese and tomato in its basics, with sucuk added.

Izmir contains a large region able to grow a rich selection of vegetables.  One of the dishes you should look for here is tarhana soup (made from dried yoghurt and tomatoes).