The well liked Brussels Airport has ion the past been voted 'The Best Airport in Europe'. According to the airport operator, its main characteristics are: European, Welcoming and Efficient.  Brussels Airport is an international airport just 11 km northeast of Brussels, Belgium.  You can take a car hire from Brussels Airport to the city via the A201, which is directly connected to the R0 highway.  From there the main highways of Belgium are all accessible.

Brussels sits at the crossroads of cultures with the Germanic populations in the North and the Romance culture in the South.  It plays an important role in Europe as the archetypal "melting pot", but undoubtedly Brussels maintains its own unique character.  It has two official languages: French (80%) and Dutch (20%).  Although Brussels was historically a Dutch-speaking area it has become more and more French-speaking since the 10th century.

Brush up on your French and take a Brussels Airport Car hire out and around this interesting and varied city.

Book your Brussels car hire vehicle in advance and get the cheapest deals on 7 seater, 9 seater, luxury car and all other types of rental car for collection in Brussels Airport.

For cheap car rental in Brussels, Belgium book in advance with us. The best way to tour Brussels is with your own rental car as it allows you to move around more comfortably and avoid the hassles of public transport. Our booking engine on the right will find you the cheapest car hire offers in Brussels Airport. 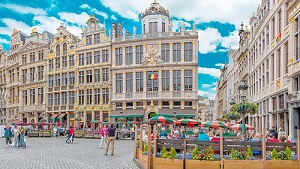 While it is worthwhile during the day, you also won't want to miss the sight of the Grand Place-Grote Markt lit up at night.  Surrounded by the city tower and a range of beautiful 300 year old buildings, this can be a great place to start your tour of the city.

Some evenings a music and light show is provided with the buildings serving as a backdrop canvas - simply brilliant!

After you visit the Grand Place-Grote Markt take the short walk over to the small bronze statue thought to represent the "irreverent spirit" of Brussels.  It speaks volumes of the whimsical nature of this culture.

Catch the shows you won't find anywhere else.  This independent cinema showcases the more esoteric side of cinema.  Looking for a Korean Ultraman rip-off, a Pakistani documentary or a bleak Chilean cinema vérité flick?  Make it dinner and a movie and get around town for the evening in your Brussels car hire.

Visit the last traditional gueze/lambic brewery in Brussels.  Cantillon Brewery still uses natural yeast fermentation, and it is still a functioning brewery.  Take the tour, which includes two small glasses of lambic and gueuze.  Only 100% bio (organic) and natural fruits are used, making this beer distinctly sour and not at all sweet.

Brussels is chock full of chocolates, and if you are a true chocoholic you will want to take time, at least a daytrip, to tour the city and find your favourite.  In Place du Grand Sablon-Grote Zavel Plein you can find three shops selling some of the best chocolate in the world: Neuhaus, Pierre Marcolini and Wittamer.  Enjoy the different specialities of each store.

Don't forget to swing by Passion Chocolat on 20 Rue Vanderlinden in your car hire.  It's a bit out of the way but its artisan chocolate is worth the drive and there are ample free samples at the entrance.

Take a cheap car rental from Brussels, Belgium and leave the city entirely.  About 15 km South of Brussels you can visit where Wellington and Bluecher faced Napoleon for an ultimate battle that changed the face of Europe forever.