Fly into Greece via Athens International Airport.  Also known as Eleftherios Venizelos Airport, after the distinguished Greek statesman, it is the main airport serving the city of Athens and the region of Attica.  Athens Airport is a major hub for Olympic Air, as well as Aegean Airlines.  More than 16 million travellers pass through the airport every year and it has become increasingly popular as a gateway to Asia and the Middle East.

You can get to the city of Athens in a variety of ways.  If you choose to take a car hire from Athens Airport you can take the Attiki Odos toll highway to the centre and northern Athens, Varis-Koropiou Avenue to western Athens, Laurio Avenue to the south, or Spata-Loutsa Avenue to the east.  There are also taxis available by exit 3 of the arrivals level, a rail station immediately adjacent to the airport terminal, and six bus lines that connect directly to the Athens greater area and Piraeus.

Around the city of Athens you can visit a number of ancient monuments and works of art as well as a vast variety of Roman, Byzantine, and Ottoman monuments.  Landmarks of the modern era are also present, dating back to 1830 when Greece was established as an independent state.  For convenient travel around the city take an Athens Airport car hire, and travel at your leisure.

Book your Athens car hire vehicle in advance and get the cheapest deals on 7 seater, 9 seater, luxury car and all types of rental car for collection in Athens Airport.

For cheap car rental in Athens, Greece book in advance with us. The best way to tour Athens is with your own rental car. This allows you to move around more comfortably and avoid the hassles of public transportation. Our booking engine on the right will find you the cheapest car hire offers from Athens Airport. 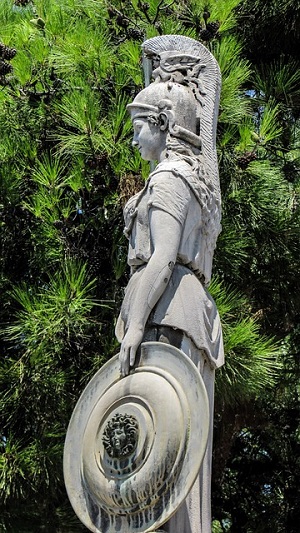 Whilst one of the most popular and recognizable monuments of the classical era, the Parthenon, is here in Athens, you can no longer go there to see its once magnificent statue of the Athena Nike.  While not exactly a replacement, the Statue of Athena, the patron goddess of Athens, at the Academy of Athens is definitely worth a visit for a photo.

This pedestrian road is about a kilometre long and connects Syntagma Square to Monastiraki.  This is one of the best places to find modern fashion shops and international brands.

It has traditionally been a consumer's paradise for both Athenians and tourists, and it is now in the top 5 most expensive shopping streets in Europe, and the 10th most expensive retail street in the world.

Lying just beneath the Acropolis, take your Athens hire car over to this area of town to view its neoclassical architecture, making it one of the most scenic districts of the city.  In Plaka it is common to see a number of picturesque tavernas, live performances and street salesmen.

Get out and enjoy Greek nature in this beautiful protected area punctuated by well-marked paths, gorges, springs, torrents and caves.  Hiking and mountain biking are popular in all four of the mountains of this area.  Save on your trip to the park with a cheap car rental from Athens, Greece.

A route taking in this pedestrianized street is not to be missed by any traveller interested in the ancient temples of Greece.

The route starts form the Temple of Olympian Zeus at Vasilissis Olgas Avenue, continues under the southern slopes of the Acropolis near Plaka, and finishes just beyond the Temple of Hephaestus in Thiseio.  Enjoy this route designed to get visitors away from the busy city centre.

This is one of the most important archaeological museums internationally, as it contains a vast collection of antiquities; its artefacts cover a period of more than 5,000 years, from late Neolithic Age to Roman Greece.

Reserve a car hire in Athens, Greece and travel around to the other significant museums of the city, such as the Benaki Museum, the Byzantine and Christian Museum, and the Numismatic Museum.

and corner of Athinas Street