Penguins, wine, skiing, fútbol, and abundant coasts, the Argentine Republic is a fantastic holiday spot to tour by car rental in South America.  Bordering Bolivia, Brazil, Paraguay, Uruguay, and Chile, Argentina is easy to reach by land, sea, and air.  Bus services are frequent to all neighboring countries in South America; catamaran routes are a popular transport among South American Ports, and Buenos Ares International Airport offers links to most major cities throughout the Americas as well as Europe, Australia, and New Zealand. 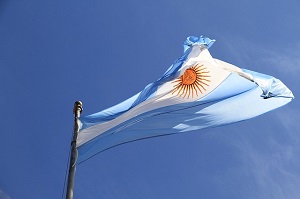 Most of the elongated country of Argentina can be described as having a temperate climate, with cold winters and hot, humid summers, which are reversed from the Northern Hemisphere.  In the deserts of Cuyo the temperatures can reach extreme highs in the summer, and in the Andes mountains the winters are very cold with cool summers.  The landscape of Argentina ranges from jungle in the northeast to to the ski centers of the Andes, and include the large plateau of Patagonia in the south and the rich plain of La Pampa in the center of Argentina.

One of the top things to do for any traveler anywhere in Argentina by car rental is drink Yerba Mate.  This delicious beverage made from green tea is served in a hollowed-out gourde, sipped through a metal straw, and shared with friends.  Other things worth sampling are Argentina's famous wine and beef.  The most famous wines hail from Mendoza, where European grapes benefit from volcanic soils, high altitude, and proximity to the Andes, creating notes not found elsewhere in the world.

To book your car rental in Argentina select from the pick up locations listed below.  Proceed by completing the booking engine on the top right of any page with your travel dates and other details and discover the cheapest rates on Argentina car rentals available.