Tenerife is serviced by two airports, Tenerife South and North airports. Tenerife South airport being the one that caters mostly to tourism and Tenerife North mainly caters to domestic flights from other islands within the archipelago. Lufthansa and Vueling fly into this airport.

The South airport is serviced by many mayor Airlines including Iberia and Ryanair; plus value airlines, such as Easy Jet. The airport remains open 24 hours a day and currently offers more than a hundred connecting flights. Its busiest days are Fridays and its busiest season is winter. It handles approximately 8 million passengers annually and has therefore implemented an Environmental Management System that complies with the requirements of the European Management and Audit Scheme.

Both Airports have many cafes, restaurants, tour operators, banking services, a VIP lounge and shops to enhance your travel experience and make your journey through the airport a pleasant and accommodating one. Plus both operate an assistance service that caters to travelers with reduced mobility.

Car rental counters in Tenerife South Airport can be found in the Central Hall. You may collect your rental car after your arrival to the airport.

Book your Tenerife Airport car hire vehicle with us and get the best discounts on any type of rental car. Our search engine will help you find the cheapest deals for 7 seater, 9 seater, luxury car or any other type of car hire vehicle for your stay in Tenerife, Spain. 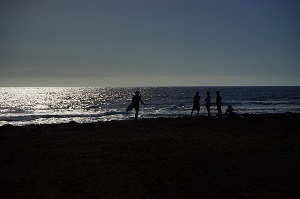 A paradise for water-sports, enjoy everything from deep sea fishing and scuba diving to pedal boating and kite surfing on the sandy shores and lovely waters of Tenerife. Best diving Spots include: Playa Paraiso, Punta de la Rasca and Las Galletas. For kite and wind surfing check out the beaches of: El Cabezo and La Jaquitas; plus Playa Jardin for surfing.

Drive to all the beaches in Tenerife in a comfortable and affordable car hire vehicle in Tenerife, Spain.

Set amongst 70,000 meters of tropical terrain, if you are a fan of leopards, tigers and jaguars, this is a must visit location for you. Located near the resorts of Playa de Las Americas and Los Cristianos, the park offers and entertaining way to spend your day.

A cheap 7 seater or 9 seater rental car is the best option for large families or large groups visiting Las Aguilas Jungle Park and other sites in Tenerife, Spain.

This wildlife park is fun for families. The park has shows which feature whales, turtles and sharks making it an entertaining and educational experience for all. Plus it is also a great place to view exotic birds such as penguins, flamingos and a large community of parrots.

Visit parks and other sites at your own leisure and schedulle in a low cost rental car in Tenerife, Spain.

Book with us to get the cheapest discounts on car hire services in Tenerife Airport, Spain.

Home of the highest mountain on the mainland and other islands of Spain, also boasting the third highest volcano in the world, the park has amazing lava formations. The now extinct volcano may be visited on foot or by riding a cable car from which stunning views may be appreciated.

How to Get There in a rental car from Tenerife:

It is located right in the center of the island, approximately 60 km from Santa Cruz.

An education experience offering the opportunity to lear about the production process of cultivating bananas, this working plantation exhibits the traditional agricultural practices used in Tenerife.

How to Get There in a rental car from Tenerife:

Located in Buzanada, quite close to Los Cristianos beach region.