Salt Lake City Airport is ideally located just 4 miles from the city centre, and it will only take a few minutes to get into the heart of the city..

The city is the most populated within the state of Utah, but is also is lose to the Rockies - which defines it climate.

The car rental facilities in SLC Airport are conveniently located on the ground floor of the short-term parking garage, directly across from the terminal buildings.  Here you will find the following car hire service providers:

On a nice day the best place to enjoy Salt Lake City is in the central park known as Liberty Park.  Here you can ride the rides at a mini amusement park, rent a paddle boat in the park's large pond, or let the kiddies play in a fountain.  The park also features swimming pools, tennis courts, places to have an outdoor bbq, and bicycle or foot paths.

Plan a visit to Salt Lake's outstanding aquarium.  The exhibits here highlight the local animal habitats of Utah waters as well as ocean animals and South American species.  Known for it's entertaining, interactive, and educational programs, the Living Planet Aquarium is the perfect place to take your family on your tour of Salt Lake City by 7 seater car rental. 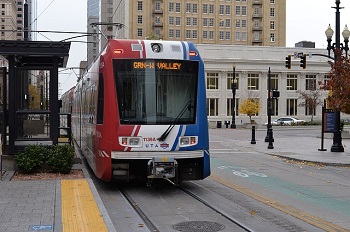 The best place to find unique boutiques as well as well known national retailers in Salt Lake city by car hire is the Historic Trolley Square.  Located at 600 South and 700 East, Trolley Square also has an eclectic mix of restaurants, a movie theater, and hosts many outdoor events in the square.  Other notable areas around town to shop include the Gateway Mall, Main Street, and Sugar House.

The most popular local spot for a quick ski or snowboarding day trip, Snowbird is located just 30 minutes from downtown Salt Lake City by car rental.  Open year round, the Hidden Peak tram ride is great for skiers and non-skiers alike and offers spectacular views in all directions.  In the summer months the area hosts a carnival.

Located northwest of Salt Lake City in the Great Salt Lake State Park, you can enjoy an afternoon of boating year round on this salt lake that never freezes.  The lake is one of the largest bird refuges in the western United States, where you can see a large pelican colony.  There are few power boats here and the area is generally quite a tranquil place to enjoy the day by car hire from Salt Lake City airport.