When visiting Russia you will most likely fly into one of Moscow's three major airports:

Moscow is one of the world's greatest cities and has played an important role in Russian history.  Exploring Moscow will lead you to lavish palaces, world class museums, and one of a kind architecture.

Booking your car hire vehicle for Moscow Domodedovo Airport in advance is the best way of getting the best deals and cheap car rental offers in 7 seater, 9 seater or any type of car hire vehicle you need for your stay in Moscow, Russia.

Although you may prefer the freedom of a car hire Moscow, Russia as your primary form of transportation, Moscow features a famous Metro system which boasts some impressive architecture.  If nothing else, its a sight worth seeing to visit a metro with chandlers, stunning arch-lined halls, and ornate classical embellishments.

The most interesting stations in terms of their interiors are Komsbmolskaya and Novoslobodskaya on the ring line, Kropotkinskaya on the red line.  However, Mayakovskaya on the green line has some impressive mosaics on the ceiling and is the deepest.  It was used as a makeshift assembly hall for a party meeting marking the anniversary of the Revolution during the Nazi bombardments in the winter of 1941.

Moscow's famed theater is a stunning bit of architecture to catch a photo of, or just an excellent place to sit outside and enjoy the fountain.  Catch a show if you can, tickets start at around 1000RUB.

Built in the early 1500s, Novodevichy served as both a convent and a fortress.  For the most part its structure has remained intact since the 17th century, making it one of the best preserved historical complexes in Moscow.  It sits next to Novodevichy Cemetery, where you can visit the graves of Boris Yeltsin and many other famous Russians.

The first destination for most visitors to Moscow is usually the Red Square, in the heart of the city.  Here you can visit St. Basil's Cathedral, the state history Museum, Lenin's Mausoleum, and one of the Kremlin's long brick walls. 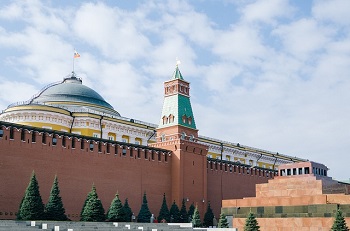 You might notice that the stones that make up the square are black, not red.  The name comes from another meaning of the Russian word "krasniy", meaning "beautiful".

Take your Moscow, Russia car hire out for a day of shopping and souvenir hunting on the kitschy Old Arbat Street.  Here you can find an abundance of tourist cafes, lousy restaurants, artists, and souvenir vendors.  The souvenir prices vary greatly, so shopping around is a must, and it helps to speak Russian.

Once an imperial estate, Kolomenskoye is now a very popular weekend destination for Muscovites and tourists alike.  Here you can find a vast collection of churches and other buildings from the 16th and 17th centuries, including some wooden architecture that was shipped here by the Soviet Government all the way from Karelia.  Located in the south-east of Moscow, enjoy your journey here and take your time with a cheap car rental Moscow, Russia.