Buenos Aires, Spanish for fair winds, is the capital of Argentina and one of the largest cities in all of Latin America.  The city consists of several barrios, each with its own distinct character and attractions worth touring.  Buenos Aires has a population of about 3 million. Get a feel for this cosmopolitan city with its scintillating nightlife and stately buildings. Visit the 16th century Plaza de Mayo at the heart of the city and enjoy all this buzzing city has to offer. Your hire car from Buenos Aires airport will give the freedom to explore all corners of the region.

The Ministro Pistarini International Airport (also known as Ezeiza) is located in the Ezeiza Partido in Greater Buenos Aires about 22 kilometres southwest of the city. It is one of two airports in the city - the other being Jorge Chavez International - but it is the country's largest airport by number of passengers it services. Terminal C was added in 2011 and in 2013 Terminal B was inaugurated.

The car rental offices in Ministro Pistarini International Airport can be found in Terminal A Arrivals.  The following car rental providers are represented at Ezeiza Airport in Terminal A:

Buenos Aires is famous for the beautiful and sensual dance known as the Tango.  Places where you can find the Tango are called "Milongas", and the best milongas start late and go on until the early hours of the morning.  If you're up for a late night. check out the Salon Canning, El Beso, and Porteno y Bailarin.  An easier tourist experience of the Tango can be found in the Confiteria Idéal in your Buenos Aires car rental, where the dancing begins in the early evening. 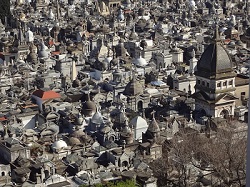 The best way to experience the "good air" of Buenos Aires is well, from the air!  Tours of the city by helicopter are available as well as skydiving, both of which provide amazing views through the famously clear blue skies of Buenos Aires - not possible from the ground.  From a helicopter you can spot popular tourist attractions like the Obelisco, Casa Rosada, and Cementario Recoleta that you might want to visit next with your car rental in Buenos Aires.

Visit the final resting place of Argentina's rich and famous throughout history.  Here you will find the most elaborate and ornate tombs in all of South America, including the ever-popular tomb of famous First Lady Eva Perón.  La Recoleta is a stop you won't want to miss on your tour of Buenos Aires by car hire.

Take a short drive outside the city to visit the famous and controversial zoo of Lujan.  A nice break from the city, Lujan also offers a beautiful cathedral and plenty of quaint streets to walk through.  Tours are available to show you around or you can simply find your way with a car rental from Ezeiza Airport.

Families visiting Argentina with children will want to stop off at the great amusement park in El Tigre - easy to get to with car rental from Buenos Aires.  El Tigre is fun for adults as well, with a multi-storied casino and a very lovely river walk.  On the weekends El Tigre hosts a popular crafts fair where you and your family can pick up some nice souvenirs.

Take a day trip from Buenos Aires by car rental to the small historic town of Carlos Keen to enjoy some of the best restaurants and tea houses in the country.  You'll feel like you've gone back in time to the 19th century; Carlos Keen is a pleasant contrast to the city of Buenos Aires with a much slower pace and nearly forgotten way of life.